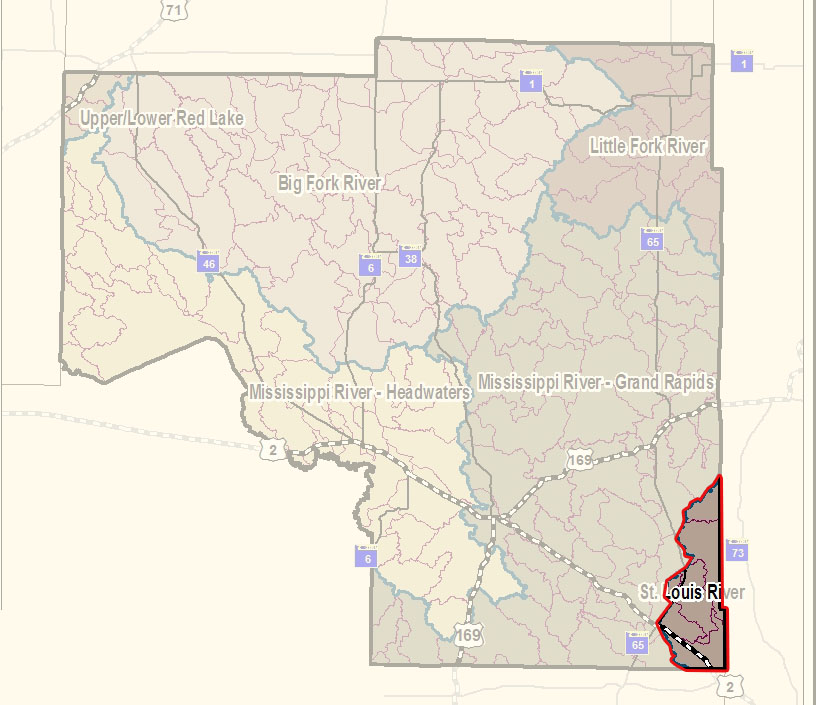 The St. Louis River watershed, which covers 3,584 square miles, is located at the head of the Great Lakes and represents the extreme headwaters of the St. Lawrence River. The St. Louis River flows in a circuitous course for 195 miles from its recognized source at Seven Beaver Lake to Lake Superior at the Superior entry of the Duluth-Superior harbor. The watershed is located entirely within the Laurentian Mixed Forest Province of the National Ecological Classification System.

The St. Louis River watershed is highly fragmented by small, short tributaries, which are a result of the shallow gradient over a majority of the surface area. Two major tributaries drain a substantial portion of the watershed.

The MPCA will address its work in the St. Louis River in two distinct segments. The Fond du Lac Dam, approximately 21 miles upstream of Lake Superior, will be the project's separation point. The decision to make two projects was driven by hydrologic variables in the portions of the river that are heavily influenced by Lake Superior’s effects.

Land ownership within the watershed is mixed and patterns are variable depending on location. Private land dominates the watershed’s lower section, below the confluence of the Cloquet River, and the upper section, along the base of the Giants Range. Tribal land, owned by the Fond du Lac Band of Lake Superior Chippewa, is located primarily in the lower portion of the watershed. State and county government are the primary landowners in the Cloquet and Whiteface watersheds and the middle portion of the St. Louis watershed. The federal government is the main landowner of the headwaters region of all three major rivers within the watershed. The St. Louis River’s immediate riparian corridor of the mainstem has a high percentage of privately owned land.

It is important to understand, for the purposes of MPCA-directed work, that the Cloquet River has been separated out of the larger St. Louis watershed and will be treated separately in the intensive watershed management beginning in 2015.

The first step of the IWM effort was conducted during the 2009 and 2010 field seasons and included intensive St. Louis River watershed stream and lake monitoring to determine overall health of the water resources, identify impaired waters, and identify those waters in need of additional protection to prevent future impairments. Data from past and current local water monitoring are included in the process. Information on watershed characteristics, like land use, topography, soils and pollution sources are also gathered in this step.